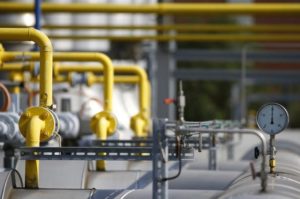 At least two offshore oil platforms halted operations on Tuesday in the U.S. Gulf of Mexico after a fire at a natural gas processing plant in Mississippi shut a crucial pipeline that brings output onshore, several companies said.

The fire at the Enterprise Products Partners LP (EPD.N) plant in Pascagoula was brought under control, but officials were forced to close the 225-mile (362 km) Destin gas pipeline system that can carry 1.2 billion cubic feet per day from offshore fields to Pascagoula.

There were no injuries from the blaze, Enterprise said, adding the cause was under investigation. Enterprise took ownership of the plant from BP Plc on June 1.

Destin, majority-owned by BP (BP.L) with Enbridge Inc (ENB.TO) a minority partner, said it was declaring force majeure, a legal clause that allows it to scrap commitments, as a result of the fire.

By Tuesday afternoon, the plant had not yet resumed operations. In a notice, Destin said that Enterprise had not yet indicated a timeline for the restart, and was looking at offering shippers options for alternate offshore transportation.

Southern Green Canyon crude <WTC-SGC>, an offshore, medium grade delivered into Nederland, Texas, traded at $3.25 a barrel discount to the U.S. crude benchmark on Tuesday compared with a midpoint of $3.80 below WTI on supply concerns.

Destin’s pipeline is connected to over 10 oil and gas platforms with capacity to produce hundreds of thousands of barrels of oil and millions of cubic feet of gas a day.

Murphy Oil Corp (MUR.N) said it shut its Thunder Hawk platform, which has capacity to handle 60,000 bpd of oil and 70 mmcfd of natural gas.

Murphy added it plans to flow gas to an alternate processing facility and expects minimal disruptions to its operations. Producers in some cases have several different routes to bring output ashore.

Offshore company LLOG, a partner of investment group Blackstone (BX.N), said it was shutting its Delta House floating production system, which has 100,000 bpd of oil and 240 mmcfd of gas capacity.

Oil major BP declined to comment on the status of its Thunder Horse and Na Kika platforms, both of which tie into the Destin pipeline and together produce close to 400,000 bpd of oil and more than 700 mmcfd of natural gas.

Royal Dutch Shell (RDSa.L) said it was not impacted.

Other Gulf of Mexico producers, including Stone Energy (SGY.N) and Freeport McMoRan (FCX.N), operate facilities that connect to the Destin pipeline, according to a company map. They did not immediately respond to a request for comment.

The U.S. crude benchmark <CLc1> settled up $1.52 to $47.85 following a two-day rout as traders bid up the benchmark on expected inventory draws.[O/R]

Gas futures <NGc1> rose more than 20 cents to $2.93 per million BTU. Traders attributed the spike to hot weather instead of the fire. About 137 million cubic feet of gas was due to flow through the metre outside the plant on Tuesday, according to Thomson Reuters Analytics flow data.

Several social media messages first said the blaze was at Chevron’s (CVX.N) 330,000 barrels per day refinery in Pascagoula, but police denied this.