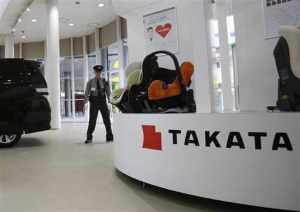 About half of those communicating their interest to Takata’s newly appointed restructuring adviser are from the auto industry, one of the sources said. At least one private equity investor has already expressed interest in offering financial support to the auto parts supplier.

The identities of the potential investors were not immediately known and it was not clear how many of them were serious about making an investment in Takata.

Takata and Lazard (LAZ.N), the investment bank overseeing the search for a financial sponsor for Takata, declined to comment.

Takata is seeking financial support as it faces mounting liabilities related to a massive global recall of its potentially faulty air bag inflators, which can explode with excessive force and spray metal shrapnel into vehicle compartments. The defect has been linked to 13 deaths and around 100 injuries globally, mainly in the United States.

The company has said it would consider a drastic review of its inflator division as well as the sale of non-core businesses as part of its restructuring efforts, after a handful of automakers, including Takata’s biggest client Honda Motor Co (7267.T), said they would stop using Takata inflators for new models.

Valient Market Research has forecast the supplier’s global share of the inflator market will sink to around 5 percent by 2020, from 22 percent in 2015. The company’s other businesses, including seat belt and steering wheel manufacturing, may remain profitable operations, it has said.

Other people with knowledge of the discussions said the committee overseeing a resolution to Takata’s financial and operational issues anticipates an agreement between the auto parts supplier, a financial sponsor and automaker customers may be reached by November.

Takata CEO Shigehisa Takada has offered to resign once an agreement is reached over a financial rescue for the company, one of the sources said.

Fifty-year-old Takada, the grandson of the company’s founder, has been widely criticized for keeping a low profile even as the air bag crisis escalated in past years, while Takata has been accused of mishandling and manipulating safety data.

The company has been under pressure for delays over identifying and replacing air bag inflators. Since recalls began in 2008, more than 100 million inflators are slated to be withdrawn worldwide by the end of 2019, and new recalls are being announced on a near-weekly basis.

To date, automakers that use air bags from Takata, one of three major global suppliers, have paid for the cost of the recalls as Takata and the automakers are yet to arrive at a consensus on what is the root cause of the fault with its air bag inflators.

Two killed in knife attack at mosque in South Africa