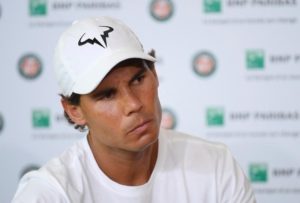 Rafa Nadal’s injury situation is “delicate” ahead of the Rio Olympics, according to Spanish team mate David Ferrer.

Nadal, a 14-time grand slam champion, has not played a competitive match since May 27 when a left wrist injury forced him to pull out of the French Open after the second round and miss Wimbledon.

World number four Nadal won gold in Beijing eight years ago and will be Spain’s flag bearer in Rio.

“I will travel with Rafa on Sunday to Rio,” Ferrer told Spanish radio Cadena Ser.

“His situation is more delicate. It’s never easy to come back after an injury. We will see how he feels.”

Roger Federer has pulled out of the Games due to a knee injury and Wimbledon finalist Milos Raonic and others are skipping the event due to concerns about the Zika virus.

“At the Olympics, you want to see all the players compete so it’s a shame,” Ferrer said. “But our calendar is very tight and then there is the Zika issue.”

Ferrer, 34, is looking to put a disappointing season behind him and is relishing the opportunity to play a third Olympics.

His form has dropped in 2016 and he fell out of the world’s top 10 in May for the first time in almost six years, before suffering a second-round exit at Wimbledon.

“After Wimbledon, I needed a break to regain my enthusiasm,” Ferrer said. “It hasn’t been my best year, very irregular and I just haven’t shown my best.

“You can’t always be at your maximum level and every year is more difficult, but I believe I can give more. I know I can play and compete better.”

More than 700 measles cases reported in Dem. Rep. of Congo