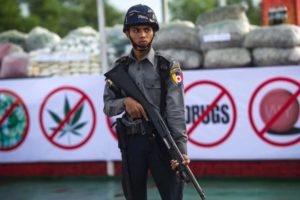 Myanmar police have detained seven colleagues from a border unit after nearly 300,000 methamphetamine tablets were found hidden at their camp, a senior official told Reuters on Thursday.

Acting on a tip-off, police raided a Border Police camp in a remote area near the frontier with Bangladesh and found the drugs buried in the camp kitchen.

“The police found a total of 292,500 stimulant tablets hidden in the ground inside the kitchen,” Soe Linn Aye, a senior officer at national police headquarters in the capital, Naypyitaw, told Reuters.

Myanmar has for decades been a major producer of opium and its refined form, heroin, and in more recent years it has also become a major supplier of the stimulant methamphetamine.

Narcotics pose a major headache for the government led by Aung San Suu Kyi, which governs the large, impoverished and fractious country after winning a landslide election victory in November.

Most drugs are produced in border areas controlled by ethnic minority rebels or by militias allied with the military.

Myanmar’s western border with India and Bangladesh is an important route used to smuggle chemicals for the production of methamphetamines into Myanmar.

The manufactured drugs are then smuggled back the other way, into South Asia, experts say. Drugs from Myanmar also flow north into China and east into Southeast Asia.

Experts fear that Myanmar could soon see an explosion in methamphetamine use. The drug is already widely used in different parts of Asia.

Newcastle not in crisis but need results, says Bruce