South Africa’s Constitutional Court on Thursday declared invalid a law that re-opened a process for blacks to make claims on land taken from them during the apartheid era, citing lack of consultation before the law was passed, Talk Radio 702 said.

The top court said Parliament had failed to allow for proper consultation before passing the law to re-open the window to make land claims, the radio station said.

Parliament now has 24 months to re-enact the law and no land claims lodged since July 2014 may be processed until this is done, or claims submitted before 1998 are finalised, the court ruled.

Parliament also approved a bill in May that would enable the state to pay for land at a value determined by a government adjudicator and then expropriate it in the “public interest”, ending the willing-buyer, willing-seller approach to land reform.

Most of South Africa’s land remains in white hands and many commercial and small-scale farmers are currently facing tough times because of the worst drought in at least a century.

Around 8 million hectares (20 million acres) of land have been transferred to black owners since apartheid, equal to 8 to 10 percent of the land in white hands in 1994. The total is only a third of the ruling African National Congress’s long-standing target of 30 percent. 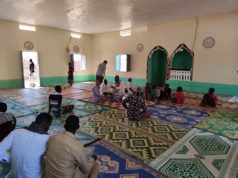 South Sudan: “We’ve been through more difficult times; we shall overcome this” – midwife...