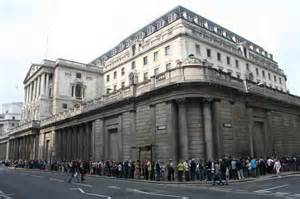 The Bank of England looks ready to cut interest rates for the first time since 2009 on Thursday, seeking to stop Britain’s vote to leave the European Union from kicking the country into recession.
It may even go a step further and pump billions of pounds into financial markets.
Economic surveys have pointed to a sharp slowdown since the BoE wrong footed markets just over two weeks ago, when it kept rates on hold while it considered a bigger, unspecified package of stimulus, which policymakers said was likely in August.
Manufacturing figures on Monday showed the most widespread downturn since early 2013. Earlier survey data for the much larger services sector pointed to the sharpest contraction since 2009.
There is a chance these reports reflect a knee-jerk reaction to the vote, so the question the BoE faces this week is how aggressively to react.
BoE chief economist Andy Haldane said he wanted to use “a sledgehammer to crack a nut”, but another policymaker, Kristin Forbes, said the central bank should stay calm and not rush into a decision until more hard data was available.
Most economists polled by Reuters expect the BoE to cut interest rates by at least a quarter percentage point to 0.25 percent, and almost half say it will restart its quantitative easing bond purchase program, on hold since late 2012. [BOE/INT]
“If you’re heading towards a waterfall, it is better to start paddling than to wait until you’re at the edge,” said Bank of America Merrill Lynch economist Robert Wood, who previously worked as a BoE forecaster.
Wood said looser monetary policy would take months to help the economy. He predicts the BoE will announce 50 billion pounds ($66 billion) of asset purchases on top of the 375 billion of government bonds bought between 2009 and 2012.
Others say the BoE’s Monetary Policy Committee might be concerned more QE at a time of record-low global bond yields could have unpredictable consequences for banks and markets.
“Taken at face value, recent survey data point to a significant recession. However, there may be some element of a knee-jerk reaction and the MPC may wish to wait for more data before making such a big call,” HSBC economist Simon Wells said.
Surveys carried out in the first half of July may reflect the temporary political disarray as David Cameron stepped down as prime minister and the Conservative Party hunted for a successor. Some data, including the BoE’s own in-house research, point to a fairly modest reaction to the referendum.
BoE Governor Mark Carney will present the policy decision in a news conference, but is unlikely to have the full support of the MPC.
Forbes, a U.S. academic who serves as an external member of the rate-setting body, said last month looser monetary policy had costs as well as benefits, and the BoE should wait for better data to calibrate its response.
The effectiveness of rate cuts and asset purchases is also in doubt at a time when 10-year British government borrowing costs  have already hit a record low 0.7 percent.
“At this stage monetary policy is almost out of juice,” Bank of America’s Wood said. Ultimately the government was likely to need to spend more or cut taxes to boost the economy, he added.
HSBC’s Wells – also a former BoE staffer – said it was probably too soon for Carney to say the BoE would act like the Bank of Japan and buy bonds in support of a fiscal stimulus which Britain’s government has only hinted at so far.
“Although the BoE may tease us with these ideas … (this) poses significant policy risks for the future and potentially undermines the BoE’s operational independence,” Wells said.
More likely is for the BoE to extend its Funding for Lending Scheme, which offers banks cheap finance in return for higher lending to the private sector and was in the process of being phased out as the economy recovered.
Other measures are also possible to ensure lower interest rates do not hurt financial institutions’ incentives to lend.
The BoE will also release a quarterly update to its growth and inflation forecasts. Sterling’s 12 percent fall since the referendum is likely to trigger a forecast that inflation will exceed its 2 percent target next year as imports become more costly.
Growth is certain to be revised down, with the main question whether the central bank forecasts a recession. Before the referendum, Carney said a material slowdown, not a recession, was his central scenario if Britain voted to leave.

Nokia Q4 profit up as operators switching to 5G networks