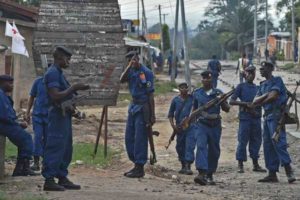 Burkina Faso’s police chief said on Sunday that his forces shot dead a jihadist overnight in Ouagadougou and were searching for two others in the latest sign of growing insecurity in the West African country.

The incident was the first deadly clash with Islamist militants in the capital since an attack on the Splendid Hotel in January that killed 30 people and was claimed by al Qaeda in the Islamic Maghreb (AQIM).

Witnesses said there was a brief exchange of gunfire between police and a group of men early on Sunday morning in the northwestern suburb of Kilwin.

“The group were Burkinabe and our forces killed one jihadist,” said police chief Lazare Tarpaga, adding that police were still seeking at least two other missing men.

He said that the group was suspected of recruiting for Islamist militant groups operating in the north of the country or elsewhere in the Sahel region, without naming a specific organization.

Public prosecutor Maiza Compaore said an investigation into the recruitment networks had been opened and that important clues had already been found, including several telephones.

Burkina Faso shares its western border with Mali, whose lawless desert north serves as a base for range of secular militias, al Qaeda-linked groups and a new body pledging allegiance to the Islamic State.

In a further sign of fragility, a group of about 30 ex-members of the elite presidential guard attempted to mount a coup earlier this month but were thwarted, Interior Minister Simon Compaore said on Friday.

Graham, wary of politics in life, gets Capitol salute