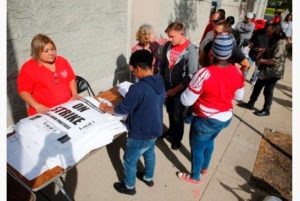 Students and teachers in Chicago were heading back to the classroom after the Chicago Teachers Union and the nation’s third-largest school district averted a threatened strike with a tentative contract agreement reached minutes before a Tuesday deadline.

Chicago Teachers Union President Karen Lewis said at a news conference just before midnight that after more than a year of negotiations, the two sides had hammered out an agreement that isn’t perfect but is good for students, teachers and the city.

The deal still must be approved by the union’s House of Delegates and the full membership, a process that could take weeks.

“There will be classes in the morning,” she said. “It wasn’t easy as you all know … we’re very pleased we were able to come to this tentative agreement.”

Chicago Mayor Rahm Emanuel said the proposal ensures teachers are respected and “appropriately rewarded.” He said it also would strengthen CPS finances and reassure parents and taxpayers that the two sides were able to work together. There was no immediate information about how much the deal would cost or how the financially struggling district would pay for it.

“Students across Chicago will be in school this morning and on the path to a stronger and brighter future,” Emanuel said at an early morning news conference at City Hall.

The four-year proposal includes cost-of-living increases of 2 percent in the third year and 2.5 percent in the fourth year. It doesn’t require current teachers to pay more toward their pensions — a change CPS had been seeking and the union rejected earlier this year. Future CPS hires would have to pick up that additional pension cost. The tentative agreement also addresses class sizes for younger grades by assigning an assistant to any class with more than 32 students.

The CTU had directed its roughly 28,000 members to report to picket lines Tuesday morning unless they heard otherwise from union negotiators for a walkout that would have affected nearly 400,000 students.