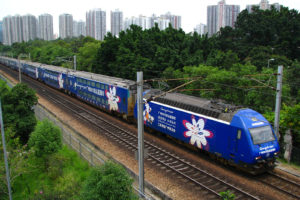 China’s state planner has drawn up a five-year plan to develop the China Railway Express to Europe, improving customs clearance and infrastructure, it said on Wednesday.

The network was crucial to China’s “One Belt, One Road” policy, spearheaded by President Xi Jinping to increase connectivity and cooperation between China and the rest of Eurasia, it said.

The 2016-2020 plan is the first top-level scheme to be proposed for the corridor, which has grown in popularity as firms seek shorter goods travel times, the National Development and Reform Commission (NDRC) said on its website.

Local governments have launched rail services over 39 lines linking Chinese cities like Chongqing to destinations in Germany, Poland and the Netherlands, but Beijing this year moved to take control of the network, rebranding the trains and containers under the “China Railway Express” brand.

The NDRC said the network, seen as an alternative to shipping by sea or air, had been plagued with high costs, disorderly competition and a supply-demand imbalance, creating a need to strengthen regulation.

The state planner would focus on developing three routes and 43 transit hubs on the network as well as improve the services and infrastructure, it said.

Fed needs to ‘get on with’ rate hikes, Harker says