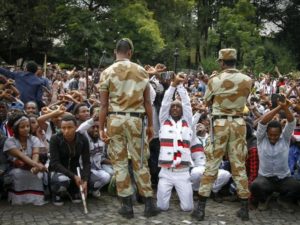 Ethiopian authorities said on Thursday they had detained 1,645 people since declaring a state of emergency less than two weeks ago in a bid to quell mass protests and violence.

Around 1,200 of those were described as ringleaders, the rest coordinators, suspects and “bandits”, in the statement by the government body formed to deal with the unrest.

Ethiopia announced a security crackdown on Oct. 8 amid a wave of attacks on mostly foreign-owned businesses and demonstrations over land and political rights.

The United States and other major donors have raised concerns about the measures, which include dusk-to-dawn curfews in some areas, restrictions on the opposition and curbs on diplomats’ movements.

Activists and opposition groups have also accused the security services of using excessive violence – charges dismissed by the government which has blamed the violence on armed groups backed by unnamed foreign powers.

“A total of 1,120 ringleaders of violence that led to the destruction of infrastructure and property in West Arsi and Shashemene have been apprehended,” said the government body known as the Command Post, referring to areas in Oromiya region, south of the capital.

The security efforts had now “restored peace nationwide”, it added.

There was no immediate comment from opposition or protest groups.

Violence first broke out last year in Oromiya, a region at the heart of Ethiopia’s industrialization efforts, as people took to the streets accusing the state of seizing their land and handing it over to investors with minimal compensation.

Unrest spread to other areas, including parts of Amhara region north of the capital, over land rights and wider complaints over political freedoms.

The command post said 93 suspects “who had taken to the bush as bandits” had turned themselves in in Amhara since the state of emergency was declared.

Another 110 people who had “coordinated attacks” in western Oromiya, and 322 suspects in a region south of the capital have also been arrested.

The government says it is trying to end poverty in a country still known in the West for a devastating 1984 famine, where most people rely on subsistence farming.

Ethiopia is now one of Africa’s fastest growing economies but rights groups say the state-led industrial push has been accompanied by a crushing of political dissent – a charge dismissed by the state.