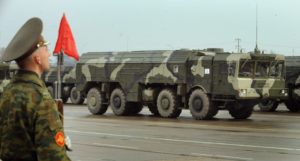 The Russian military says it has conducted drills involving state-of-the art missiles near the nation’s western border, amid tensions in relations with the West.

The Defense Ministry said Thursday that the drills involved Iskander-M missiles. The war games were held at a shooting range near the city of Luga, about 100 kilometers (60 miles) east of the border with Estonia.

According to the military, the exercise featured the deployment of missiles and preparations for firing them, but didn’t involve actual launches.

Iskander has a range of up to 500 kilometers (310 miles) and high precision, allowing it to target facilities in several NATO member nations neighboring Russia.

Moscow has complained strongly against the deployment of NATO’s forces near Russia’s borders and promised to take countermeasures.

Dell planning for potential fourth round of U.S. tariffs