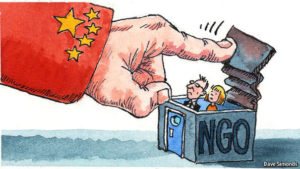 There will be no “grace period” for the implementation of new regulations limiting the activities of foreign non-governmental organisations (NGOs) in China that are slated to come into effect in 2017, according to the Ministry of Public Security.

Western governments have lambasted the foreign NGO law passed in April, saying it treats the groups as a criminal threat and would effectively force many out of the country.

“China is a country with the rule of law – no law has a ‘transition period’ or ‘grace period’ after it takes effect,” a representative from the Ministry of Public Security’s Foreign NGO Management Bureau told consular officials from 11 countries at a briefing in Shanghai on Tuesday.

Foreign NGOs would have to partner with a Chinese organisation and would be banned from working in different geographical regions from their Chinese counterparts, the representative said, according to a statement on the ministry’s website.

Chinese officials defend the foreign NGO law, saying it would only be used to punish a handful of law-breaking NGOs.

Rights groups say the law’s use of an ambiguous ban on activities that threaten national security or endanger social stability could be used to target groups doing work disliked by the ruling Communist Party.