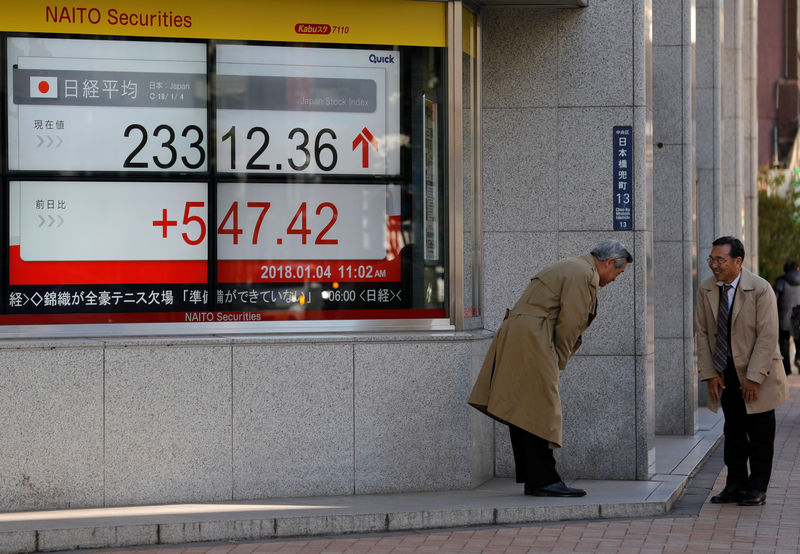 Asian shares inched closer to their record 2007 peak on Friday as U.S. jobs data pointed to firm economic growth although the greenback was soft as the spectre of benign inflation capped domestic bond yields.

MSCI’s broadest index of Asia-Pacific shares outside Japan (.MIAPJ0000PUS) rose 0.2 percent in early trade, with the benchmark index in Australia (.AXJO) and South Korea (.KS11) both up about 0.5 percent.

MSCI’s gauge of stocks across the globe (.MIWD00000PUS) has risen 2.1 percent so far this week, on course to log its best weekly performance since July.

The U.S. ADP National Employment Report on Thursday showed U.S. private employers added 250,000 jobs in December, the biggest monthly increase since March and well above economists’ expectations of a rise of 190,000.

Despite the strong U.S. jobs report, the dollar was soft, hovering just above its three-month low against a basket of major currencies.

“The dollar looks very weak at the moment. And I think the reason comes down to the fact that U.S. long-term bond yields are very low despite the Fed’s rate hikes,” said Masashi Murata,

The 10-year U.S. Treasuries yield stood at 2.460 percent <US10YT=RR>, below its seven-month peak of 2.504 percent touched on Dec. 21. Even after the Fed hiked interest rates three times last year, its levels are little different from about a year ago.

Many emerging economy currencies have gained sharply against the dollar this week as investors look for higher yields.

In commodities markets, oil prices held near their highest level since May 2015, on concerns about supply risks due to unrest in Iran and another decline in U.S. inventories as refining activity hit a 12-year high.

China drags on Asia shares, politics on euro and peso

Russia agrees to talks with NATO after Warsaw summit: France