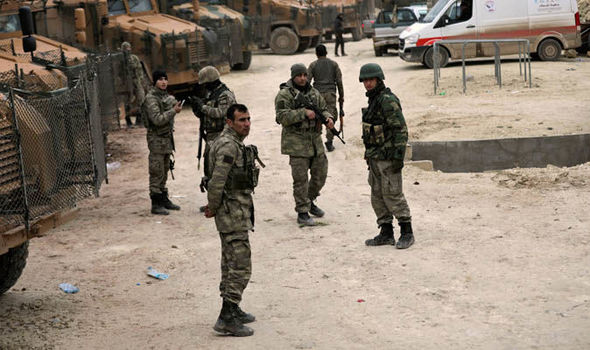 Turkish and Free Syrian Army forces on Monday captured another village from PYD/PKK terrorists in northwestern Syria, near the Turkish border.

According to an Anadolu Agency correspondent in the region, the armies launched a joint operation in the village of Sourkeh in Racu, western Afrin.

Since the beginning of the operation, the Turkish Armed Forces and Free Syrian Army have managed to capture 35 different strategic areas from terrorists.

According to the Turkish General Staff, the operation aims to establish security and stability along Turkey’s borders and the region as well as to protect Syrians from terrorist oppression and cruelty.

The operation is being carried out under the framework of Turkey’s rights based on international law, UN Security Council resolutions, its self-defense rights under the UN charter, and respect for Syria’s territorial integrity, it said.

The military has also said that only terrorist targets are being destroyed and “utmost importance” is being put on avoiding harming civilians.

Afrin has been a major hideout for the PYD/PKK since July 2012 when the Assad regime in Syria left the city to the terror group without a fight.

Iran says if it decides to block Strait of Hormuz, it will do it...