Irish Foreign Minister Simon Coveney on Friday welcomed a British plan for ensuring there are no customs checks along the Irish border when Britain leaves the European Union, but said it only told half the story.

The border between Northern Ireland and EU member state Ireland will be Britain’s only land frontier with the EU after Brexit and both sides agreed they must lock in a backstop arrangement to keep that border open in case a future trade pact fails to do so.

Prime Minister Theresa May, who is struggling to contain divisions within her cabinet over Brexit, proposed on Thursday that she would keep Britain tied to the EU’s customs union for up to extra year after an almost two-year transition period if there were any delay in implementing a divorce deal.

Coveney welcomed the “honesty” of the proposal but said there was more work to do to ensure Northern Ireland also abided by the rules of the EU’s single market.

“Yes, this is half the story – there’s recognition that more work needs to be done, but nevertheless it’s a step forward on customs,” Coveney told national broadcaster RTE.

“…The second issue will be the regulatory alignment and we’d like to make some progress by the end June. I don’t think we need to have full progress on both or everything by the end of June,” he said in reference to a summit of EU leaders

May’s paper did not breach the Irish condition that the backstop cannot be time-limited, Coveney signaled, noting that the language on an end date was aspirational rather than definitive.

But a “big caveat” was that ultimately the proposals had to be acceptable to EU Brexit negotiators and must not create a backdoor to the EU’s single market via Northern Ireland. 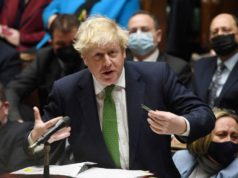