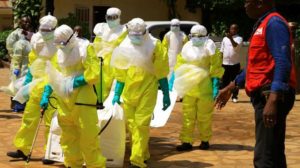 Three volunteers from  Congolese Red Cross helping with the burial of an Ebola victim in eastern Congo were injured in an attack by villagers, prompting the International Committee of the Red Cross to suspend burials in the area, health officials said on Wednesday.

The attack on an ambulance transporting the body to a cemetery in North Kivu province’s Beni region is the latest disruption to efforts to control the current outbreak, which is believed to have killed 106 people since July.

The World Health Organization (WHO) last week raised its assessment of the risk of the disease spreading within the region to “very high” after a case was confirmed near a lakeside border crossing point with Uganda.

Community resistance in eastern Democratic Republic of Congo has been one of the main problems facing healthcare workers, in addition to armed attacks by militia groups.

“Security measures were taken immediately. Burials are suspended until further notice,” he said by telephone, referring to ICRC activity in and around Butembo city in Beni region.

Proper burial of Ebola victims is critical to control the disease, which causes fever, vomiting and diarrhea, and is spread through direct contact with body fluids.

Robert Kahumula, the local spokesman for the Congolese Health Ministry’s Ebola response team., said the health workers “were wounded during an attack by young people, skeptical of the presence of Ebola in the region”.

“The burial did not take place because the young people ambushed the response team and vandalized the ambulance that was transporting the body,” he said.

Last Thursday, the WHO warned of a build-up of mistrust toward Ebola response efforts in certain communities in eastern Congo as a result of rumors, misinformation and a preference for traditional medical practices.

Mother Teresa of Calcutta to be made Roman Catholic saint Sept. 4: pope

Water found in atmosphere of planet beyond our solar system