Bournemouth’s top scorer Callum Wilson will be on the sidelines for three weeks after undergoing a minor knee operation, manager Eddie Howe has said.

England international Wilson, who has netted 10 Premier League goals this season, picked up the injury against West Ham United on Jan. 19, having missed the previous two matches with a hamstring issue.

Howe confirmed the extent of Wilson’s new injury after Bournemouth produced a clinical performance to stun Chelsea 4-0 in the league on Wednesday.

“Callum just had a very very minor knee operation, just to clean it out. He will be around about three weeks we think, so not too serious,” Howe told reporters.

Tenth-placed Bournemouth next face a trip to relegation-threatened Cardiff City on Saturday.

Israel’s Yaalon in US after spat over Kerry remarks 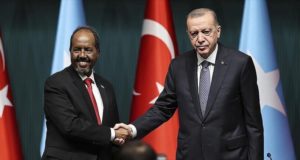