A year after the European Parliament said Orban’s actions carried “a clear risk of a serious breach” of core EU values, ministers met in Brussels for a first formal hearing on Hungary.

“The EU is like a family in many regards. And in a family there has to be a common set of rules… otherwise it cannot work. And rule of law is a foundation of that,” said Austria’s EU affairs minister Alexander Schallenberg.

Orban, in power since 2010, has also angered the EU with his harsh anti-immigration stance and crude campaigns against the bloc with anti-Semitic undertones.

But, widely seen as a Machiavellian and shrewd operator, he has mostly escaped punishment beyond being suspended from the bloc’s biggest centre-right parliamentary group.

The bloc is, however, seeking to make its generous assistance to poorer members like Hungary and Poland – where Orban’s fellow nationalists have also put media and judges under more state control – conditional on upholding the rule of law.

The hearing was part of a prominent probe by the bloc against Hungary over flouting of the rule of law, the so-called Article 7 investigation, which could lead to the suspension of Budapest’s EU voting rights if all other capitals agreed.But, offering Budapest a clear lifeline, Poland’s EU minister Konrad Szymanski said after the session that Warsaw did not believe Orban’s policies constituted any systemic risk for democratic standards.

Others stressed that Budapest would not be let off the hook.

“Without respect for the rule of law there is no EU. This is the very foundation on which the EU was biult,” said Frans Timmermans, who has led the probes by the bloc’s executive European Commission both against Hungary and Poland.

Speaking for both Paris and Berlin, French EU minister said the situation in Hungary was “worrying”.

With eurosceptic and nationalist politicians in several EU countries riding a wave of public discontent perpetuated by sluggish economies, anxiety over globalisation and immigration to Europe, the bloc is seeking to step up democratic defences.

Hungary, however, rejects the bloc’s criticism, with Hungary’s Justice Minister Judit Varga saying after the session:

“To deny the community of values with a member state only because of different positions in certain issues related to EU politics and policies would create a dangerous precedent and would question the very foundations of European integration.”

“It is in the interest of the EU as a whole to close this unfortunate chapter and focus on the vast challenges that are in front of us.”

Bollywood biopic on Modi runs into trouble days before vote

Mueller says FBI not to blame for Flynn’s false statements

Clashes in Burkina over move to extend leader’s rule 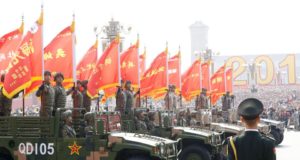