Britain’s main index edged lower on Friday as exporter stocks took a hit from a rise by the pound to near two-month highs, while energy supplier SSE shone after agreeing a deal to sell its retail segment.

The FTSE 100 .FTSE fell 0.1%, with international companies including AstraZeneca (AZN.L) and Unilever (ULVR.L) weighing the most, while the more domestically-focussed FTSE 250 .FTMC inched 0.1% higher.

Diageo (DGE.L), the world’s largest spirits company and another stock sensitive to moves in sterling, lost 2%. Reuters reported on Thursday that unions were demanding a 5% pay rise for workers due to go on strike in Scotland later this month.

Among midcaps, Woodford Patient Capital Trust (WPCT.L), money manager Neil Woodford’s listed fund, fell 7% after the trust’s administrator cut the valuation of one of its holdings.

Prince is gone, but his spirit lives at Minnesota Super Bowl 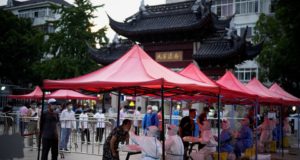