Spain made it five wins out of five in their Euro 2020 qualifying campaign by earning a scrappy 2-1 victory in Romania on Thursday despite playing the final stages with 10 men after defender Diego Llorente was sent off.

Captain Sergio Ramos gave Spain a deserved lead in the 27th minute by converting a penalty to score a fourth goal in five European qualifiers, his third from the spot.

Paco Alcacer put the visitors further at ease by scoring early in the second half after missing three earlier chances, but substitute Florin Andone brought Romania back into contention with a close-range strike in the 59th minute.

The goal galvanised the vociferous home crowd and they grew more determined after Llorente was shown a straight red card with 11 minutes left for denying a clear scoring opportunity with a foul.

Spain were let off the hook when George Puscas blazed over the bar in stoppage-time after an outstanding save from goalkeeper Kepa Arrizabalaga and they clung on to earn a first win away to Romania at the seventh attempt.

It was also a welcome first win for Moreno, who became Spain coach in June in unfortunate circumstances when Luis Enrique stepped down to spend more time with his daughter, who died from cancer last week aged nine.

Moreno said the nature of the victory would serve his team well in the long run.

“This will make us grow as a team, we had to defend together and attack quickly, I think this could be good for us, we should congratulate ourselves for getting this result and we’re very happy” he told reporters.

“We knew Romania would put us under pressure until the end, they did that against Sweden and Norway when they were losing in the last few minutes and managed to score. It’s a shame we couldn’t score more as we created a lot of chances.”

Moreno’s side top Group F with 15 points from five games, Sweden are second with 10 after thrashing the Faroe Islands 4-0 away from home, while Norway are third on eight after beating Malta 2-0. Romania slipped down to fourth place on seven.

Sweden produced a first-half blitz against the Faroe Islands, with teenage forward Alexander Isak heading home the opener in the 13th minute and scoring again moments later with a sweeping low finish.

Manchester United defender Victor Lindelof grabbed the third by lashing into the bottom corner and Robin Quaison netted the fourth.

Sander Berge put Norway in front against Malta and striker Josh King doubled the lead from the penalty spot on the stroke of halftime. 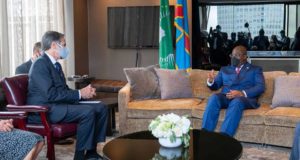