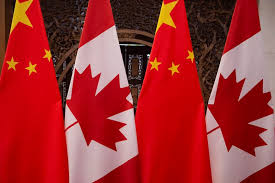 China’s foreign ministry said on Friday Canada’s attempt to link Sino-U.S. trade matters with other issues is doomed to fail.

Geng Shuang, spokesman at the ministry, made the comment at a regular media briefing when asked about Canadian Prime Minister Justin Trudeau’s latest remarks on China-U.S. trade talks.

Trudeau said on Thursday that the U.S. government should not finalize a trade deal with China unless the pact also secured the release of two Canadians detained by Beijing.