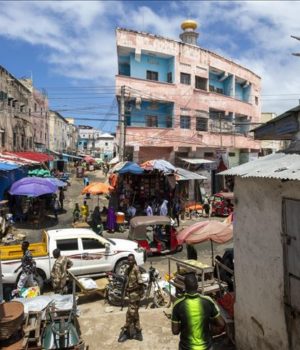 Turkey and Somalia plan to further enhance cooperation in media and information, Turkey’s envoy to the Horn of Africa country said on Sunday.

Ambassador Mehmet Yilmaz met with Osman Obokar Dubbe, the Horn of Africa nation’s Minister of information, culture and tourism to discuss cooperation between their two countries.

After being taken on a tour of the Somalia National Television (SNTV) studios, Yilmaz told reporters that he saw, “a lot of dedicated young people […] I saw how energetic they are. In the near future, their institutions will boost and become one of the main sources of information and culture in Somalia.”

Yilmaz told reporters that together with the Dubbe, they discussed how to improve existing relations and cooperation between Turkey and Somalia “especially when it comes to media and information.”

“Turkey has very strong agencies like the [public broadcaster] TRT and we have very strong private broadcaster companies […] On the public agency side we have Anadolu Agency which has a presence in Mogadishu,” he said, adding: “I think there’s big potential to develop cooperation between those agencies and yours.”

“I hope that in the coming weeks, not months, we’ll have some concrete outcomes and those institutions will come together and work on specific topics to improve relations.”

Yilmaz promised more general cooperation between the people of Somalia and Turkey, emphasizing that Turkey would stand with the Somali people and would continue its support.

For his part, Dubbe thanked Turkey for its assistance and Yilmaz for his visit.

Judge to be asked to let cameras in court for R. Kelly case