Secretary of State Mike Pompeo has met with his designated successor as America’s top diplomat and is rejecting suggestions that the United States is a “banana republic” because of the attack on the U.S. Capitol.

Following the assault on the Capitol by supporters of President Donald Trump. Pompeo met with Antony Blinken on Friday after having taken to Twitter to denounce comments from foreign officials and commentators that the U.S. had lost its standing to weigh in on democracy and democratic values abroad.

As Pompeo spoke, the State Department instructed U.S. embassies overseas to defend the American political process even while Trump sought to subvert it.

“Today, I met with President-Elect Joe Biden’s designate @ABlinken in order to facilitate an orderly transition, and to ensure American interests are protected abroad,” Pompeo said, “Our meeting was very productive, and we will continue to work together on behalf of America throughout the transition.”

Pompeo is one of Trump’s strongest supporters in the Cabinet and has unstintingly defended him since Biden won November’s presidential election. Pompeo has not interfered in the Biden transition team’s efforts to prepare to take office on January 20. But, he has been highly critical of Biden and his foreign policy nominees for their work during the Obama administration, including Blinken.

Earlier, Pompeo spelled out why the United States isn’t a “banana republic” in tweets responding to global criticism following this week’s assault on the Capitol by Trump supporters

The fact that Pompeo would even acknowledge comments comparing the U.S. to a “banana republic” — a term most often used to derisively describe military dictatorships in Latin America and Africa — was a sign that the events of Wednesday have caused significant damage to U.S. standing as a champion of democracy and human rights.

His comments reflected an understanding of the international concern about the violent attack on Congress by supporters of the outgoing president and represent an attempt to shut down ridicule of the U.S. from countries that have often been on the receiving end of U.S. criticism for democratic backsliding.

Pompeo has been one of Trump’s most loyal supporters over the past four years, and took offense at critical comments from other world leaders about the state of U.S. democracy. He focused on the fact that Congress had confirmed Biden’s victory over Trump despite the disturbances.

“In the wake of yesterday’s reprehensible attack on the U.S. Capitol, many prominent people – including journalists and politicians – have likened the United States to a banana republic,” Pompeo said late Thursday. “The slander reveals a faulty understanding of banana republics and of democracy in America.”

“In a banana republic, mob violence determines the exercise of power,” he continued. “In the United States, law enforcement officials quash mob violence so that the people’s representatives can exercise power in accordance with the rule of law and constitutional government. Congress’s completing its certification of electors — with our law enforcement heroes having restored order in the Capitol — at 3:40 AM today shows the strength of American political institutions and represents a victory for the rule of law (and) constitutional government in America.”

On Friday, Pompeo tweeted that despite any issues, “America is a force for good in the world.”

As his tweets were posted, the State Department ended a ban on American diplomats commenting about the election results and instructed U.S. embassies overseas to defend the American political process and extol the virtue of a peaceful transition of power.

Guidance sent to U.S. diplomatic missions abroad said diplomats should point to the end result of the electoral process and the strength of American democracy.

It cited what it called “bipartisan quotes” from Trump, Vice President Mike Pence and President-elect Joe Biden suggesting unified opposition to the riot. But the Trump tweet it quoted from was one that had been widely criticized. Sent during the riot, it urged his supporters to be peaceful, but Trump disregarded the widespread demands that he insist that they leave the Capitol where they were preventing lawmakers from certifying the election. The rampage continued long after the tweet and Trump didn’t denounced the riots until late the next day.

The instructions end with advice for diplomats to tell foreign audiences and governments that there will be a peaceful transfer of power.

“As is being called for by representatives from across the political spectrum, order will be restored, those responsible will be held to account, and the democratic process will continue,” the secretary said. “President-elect Biden will be inaugurated on January 20.” 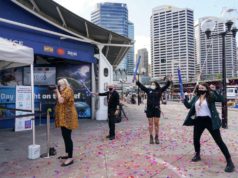 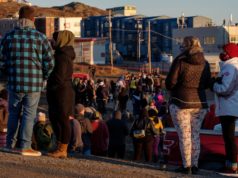 British firms hope for halcyon days ahead of royal wedding