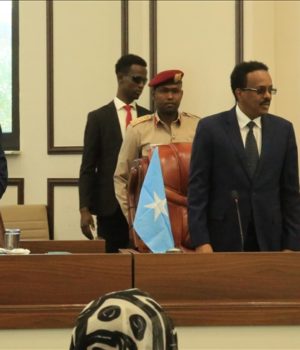 Somali parliament on Monday voted to extend the mandate of the president and the federal government by two years in a bid to end a political stalemate over national elections.

In a special session, at least 149 lawmakers voted in favor of the motion, three members rejected it while one member abstained, according to the leadership of the country’s lower house of the parliament.

Somalia’s next elections will be held in two years and will be based on one person, one vote election system, according to a resolution issued by the house speaker, Mohamed Mursal Abdirahman.

President Mohamed Abdullahi Mohamed urges the citizens to seize the historic chance to choose their destiny as the House of the People voted to return the elections mandate to the people, Somali presidency said in a statement after the vote.

Meanwhile, Mogadishu Provincial Police Chief Sadaq Omar Hassan, who was trying to block the parliament from making a decision by halting the session, was dismissed by Somali National Police Chief Abdi Hijar.

The Somali National News Agency announced that Farhan Mohamed Adan has been appointed as Hassan’s replacement.

Somali leaders failed to agree on the election issues and the latest talks between the federal government, five regional leaders and the mayor of Mogadishu ended without any agreement last week.

On April 8, Somalia’s former Prime Minister Omar Abdirashid Ali Sharmarke said the government was creating frustration so that it can rush with an extension of mandate.

“The intent to frustrate the talks will only contribute to instability and fragmentation. Such actions must be held to account before the situation escalates further,” he had said in a statement.

The Horn of Africa country has seen political and election stalemate after the current president’s mandate expired on Feb. 8 and opposition leaders announced that they do not recognize him as president.