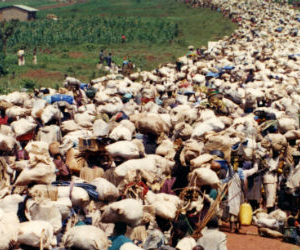 A Rwandan priest who was indicted and imprisoned in France for his role in the massacre of Tutsis during the 1994 genocide, was released this week under judicial supervision, French media reported Friday.

Marcel Hitayezu, 65, was arrested at his home in Montlieu-la-Garde, Charente-Maritime and indicted April 14, notably for “genocide” and “complicity in crimes against humanity.”He denies the charges.

The priest was released by the investigating chamber of the Paris Court of Appeal –which reversed the order of provisional detention, AFP reported, quoting a judicial source.

Hitayezu was placed under judicial supervision with a prohibition to leave the department of Charente-Maritime.

“The judicial institution considered that there was no reason to keep him in detention, given his guarantees of representation and the fact that he will not leave France,” his lawyer Vincent Asselineau was quoted by the news agency.

Hitayezu served as a priest in the parish of Mubuga in southern Rwanda in 1994.

During the 1994 genocide against the Tutsi ethnic group, he is accused of depriving food and water to Tutsis who had taken refuge in his church, according to the National Antiterrorist Prosecutor’s Office.

He reportedly provided food to the Interahamwe militiamen who attacked Tutsi refugees in the building.

Hitayezu is believed to have arrived in France between 1998 and 1999 in the diocese of La Rochelle, after spending three years in refugee camps in eastern Congo.

He was granted refugee status in January 2011 and was naturalized.

In October 2016, the French Court of Cassation rejected Rwanda’s extradition request for Hitayezu.

About 1 million people, mostly from the Tutsi community and moderate Hutus, were killed in the genocide by Hutu extremists during a massacre within 100 days.

The Rwandan government has faulted countries offering suspects haven — urging them to try or hand over the accused to Rwanda to face justice.

More than 1,000 suspects have taken refuge in different countries including France, the US, Netherlands and Canada, according to Rwanda’s Genocide Fugitives Tracking Unit.