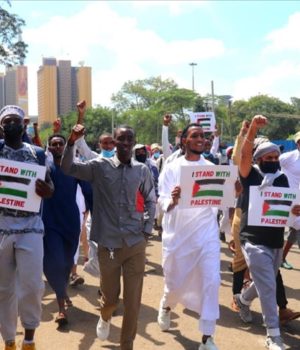 Muslims in the Kenyan capital took to the streets in large numbers after Eid prayers in a show of solidarity with Palestinians who are facing disproportionate Israeli violence.

Some demonstrators in Nairobi said this year they will celebrate Eid with a heavy heart as Palestinians are being massacred by Israeli forces.

“This is a very significant day, a very important day for us, this year we completed our fast despite many challenges such as hard economic times that saw some of us stay hungry, not due to fasting but because people have nothing to eat… other challenges were brought by COVID-19 effects,” Hassan Abdi, 33, told Anadolu Agency.

“Whatever we are seeing in Palestine could have happened in Kenya, social media is awash with messages from Kenyans calling for the end of injustices such as the ones we are witnessing in Palestine, that is why Kenyans are on the streets today protesting,” he said.

Ragheb Omar a businessman, said: “It is supposed to be a joyous day for us but we are very sad, our Muslim brothers have been butchered mercilessly by the Israel Zionists who have attacked them during the holy month of Ramadan.”

Jacob Njenga, a Christian who had joined one of the marches, said: “Every year Muslims invite us for their festivities, even with COVID-19 hardships they have invited us, I am marching with them to support our brothers and sisters in Palestine to be free, all Kenyans condemn wanton killing we are in solidarity with them.”

Israel continues to target Gaza with heavy bombardment so far killing 83 Palestinians, including 17 children and seven women, according to health officials. At least 388 others have been injured, in addition to heavy damages to residential buildings across Gaza.

To date, six Israelis have been killed — five of them in rocket attacks in addition to a soldier killed when an anti-tank guided missile struck his jeep.