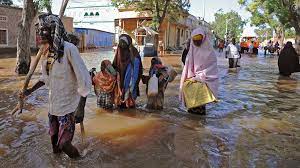 Jowhar town, the administrative capital of Hirshabelle State, and its surrounding areas were heavily hit by the floods, threatening a dire humanitarian crisis in the region.

Mohamed Abdullahi Adan, a 40-year-old father of 6, told Anadolu Agency over the phone on Friday that they are facing a humanitarian crisis after the floods cut them off from the rest of the country.

“The river flooded our agricultural lands and destroyed crops. We need urgent humanitarian assistance and the only way to do that in some areas is by air because all the roads are completely cut off,” said Adan, who lives in a village located 10 kilometers (6 miles) from the town of Jowhar.

“The flood-hit areas around Jowhar city are totally isolated and can only be reached by boat or air. The recent floods in Jowhar have affected thousands of families while destroying vast agricultural lands,” Somali government spokesman, Mohamed Ibrahim Moalimu, said after the visit.

In a statement Friday, United Nations Office for the Coordination of Humanitarian Affairs said flooding in Somalia has affected 400,000 people in 14 districts since late April, of whom 101,300 people have been displaced from their homes mostly in Middle Shabelle. In Jowhar district, 66,000 people are displaced, the UN office said.

Somalia to seize ships fishing illegally in its waters