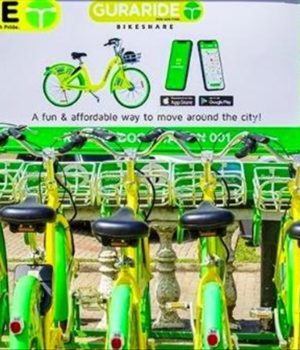 The landlocked African country Rwanda is perhaps the only country, where bicycle taxis are seen circumventing traffic jams and transporting men and material in the capital Kigali.

Speaking to the media on eve of World Bicycle Day, which is observed on Thursday, Damascene Majoro, a bicycle taxi driver said till a few years ago, using a bicycle on Kigali’s tarmac roads was prohibited, and quite often police used to impound bikes and impose heavy fines.

But realizing the potential of bicycle, not only as a mode of cheaper transport but also its pollution-free nature and contribution to public health, authorities have lifted the ban. The same government prohibiting their use a few years ago is now promoting them as an environmentally friendly mode of transport in the city.

Majoro carries passengers from Kigali’s Airport road to Remera junction in the suburb of Kabeza in the Kicukiro district. He earns 3,000 Rwandan francs ($3) on weekdays but sometimes even higher.

He said since the ban on cycling was lifted, the cycle has become a money-spinner, allowing him to shoulder the responsibility of his family.

Fulgence Habimana, 23, who is also the owner of the bicycle taxi was earlier detained twice for riding a bicycle on the roads of Kigali.

“Authorities claimed that bicycles were responsible for road accidents, which was unfair,” he said.

When the ban was lifted, he hired a bike and used to pay 1000 Rwandan francs ($1) a day to the owner. But now he has bought his bike.

“With this income, I can save and pay school fees for my children in time. I can confidently advise my fellow youth who are idle to get their hands out of their pockets and join this job,” he said.

In absence of dedicated bicycle lanes, the riders have to compete for space with pedestrians, buses, speeding private cars, motorbikes, as well as cargo trucks.

“Sometimes we do not feel safe on the road, but we have to work because we need the money. If the road is widened that would be helpful,” said Majoro.

Sylvain Uwimana, who regularly uses a bicycle taxi for commuting said it is much cheaper transport for low-income earners like her.

Authorities also now admit that allowing the youth to earn a livelihood by engaging in cycling has helped to minimize crimes, as most of the riders are school dropouts without other formal employable skills.

Take a cue, the Kigali city authorities in partnership with a private entity, have now launched a campaign to promote non-motorized transport to save the environment and improve the health of citizens.

As part of this camping, the partner Gura Universal Link is installing modern green mobility ridesharing docking stations across two networks in the city center and Gisimenti- Kimironko corridors, city authorities said in a recent statement.

Each station has provision for at least five bikes.

The city authorities are offering these bikes free of charge for the first three months to make people habitual of using them.

All the bikes are GPS-tracked and cannot be opened by anyone who is not profiled in the system. Those not registered and without authorization code will not be able to open the lock of the bike. The locks are fortified with a barcode and can be tracked through the GPS.