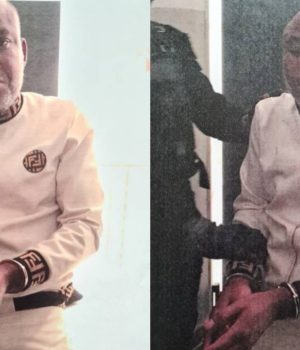 The Nigerian government refused on Thursday to disclose any details on the re-arrest of separatist leader Nnamdi Kanu, amid mounting speculation over which other countries were involved in his capture after he went on the run four years ago.

Kanu, leader of the Indigenous People of Biafra (IPOB) group, had skipped bail and disappeared while facing trial in 2017 and his whereabouts were not publicly known until he was brought to court in handcuffs in Abuja on Tuesday.

“The re-arrest was made possible by the diligent efforts of our security and intelligence agencies, in collaboration with countries with which we have obligations,” Information Minister Lai Mohammed told reporters.

“We continue to respect and honour the obligations,” he said, giving no further details.

Kanu’s brother has said he was in Kenya when he was caught. A spokeswoman for the Kenyan interior ministry said it was not aware of the matter, while the foreign affairs ministry in Nairobi did not respond to a request for comment.

The circumstances of Kanu’s arrest have been the subject of intense media speculation in Nigeria, where reports have named the United Kingdom, the Czech Republic and Israel as countries where Kanu may have been in recent times.

IPOB has said Kanu was “abducted” and it would give details later. In the past, crackdowns on IPOB by the authorities have led to unrest. Amnesty International has accused the Nigerian authorities of killing hundreds of separatists, which it denies.

IPOB campaigns for the secession of a southeastern region that tried in 1967 to break away from Nigeria under the name Republic of Biafra, triggering a three-year civil war in which more than a million people died, mostly from starvation.

Mohammed said Kanu was facing 11 charges including treason, terrorism and illegal possession of firearms. His case is due to resume in court on July 26-27.

UN rights envoy at Saudi consulate in Istanbul for Khashoggi