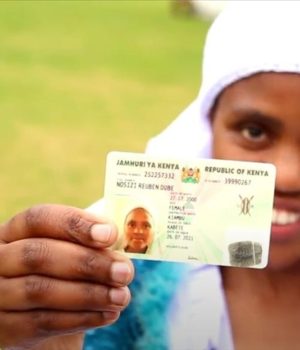 The Shona community, which migrated to Kenya in 1959 from Zimbabwe and has been living as stateless, on Wednesday got Kenyan identity cards with full citizenship rights.

Kenyan Interior Security Minister Fred Okengo Matiangi handed out identity cards to 1,649 members of the Shona community at a ceremony in the capital Nairobi.

Matiangi said: “From now on, you are citizens of this great country called Kenya. You have a Kenyan ID, so participate effectively, freely and strongly in the development of your country.”

Matiangi directed all educational institutions in the East African country to allow admission to children from the Shona community who had problems accessing education due to being stateless.

Challenges of being stateless

Nosizi Dube, a 20-year-old member of the Shona community who is studying economics at Nairobi University, told Anadolu Agency about the challenges she and her community faced without an identity card.

“To be a stateless person is very difficult. You are not entitled to healthcare and education like other Kenyans. Majority of our community members are primary school dropouts due to a lack of identity cards and birth certificates,” Dube said.

The Shona people arrived in Kenya in 1959 as missionaries when Kenya gained independence from the British in 1963. They were unable to prove their legal ties to their countries of origin as required by legislation governing the registration of births and citizenship in Kenya.

Kenya also announced it will give citizenship to the Sagaf community of Tana River, which will be the last batch of stateless people getting identity cards.

In 2016, 1,496 members of the Makonde community living in Kwale County officially became Kenyans after the government granted them citizenship.