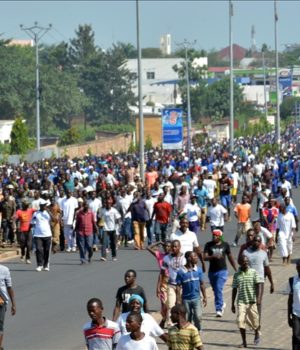 Burundi’s opposition party denied involvement in terrorism on Thursday after the government issued an international arrest warrant for its leader.

Alexis Sinduhije, the leader of the opposition Movement for Solidarity and Development (MSD), is accused of leading a group responsible for multiple “terrorist acts” in the country, Attorney General Sylvestre Nyandwi said Wednesday.

The warrant was issued after a recent spate of deadly grenade attacks in Bujumbura and Gitega, the commercial and political capitals, respectively.

But Nyandwi said the warrant is related to earlier attacks, including grenade explosions and ambushes that killed dozens and injured several since the start of 2020.

“The investigations already carried out have revealed that these acts are committed by a band of terrorists led by Alexis Sinduhije,” said Nyandwi. “Under national and international law, these acts constitute acts of terrorism, as well as crimes against humanity.”

The MSD rejected “the unfounded accusations of a government incapable of ensuring the safety of its citizens.”

“Neither our leaders nor our members are oriented towards violence against our fellow citizens,” it said in a statement.

Arrest warrants were also issued for MSD’s Secretary-General Francois Nyamoya, exiled in Rwanda, and the founder of the Maison Shalom home for orphans, Marguerite Brankitse, who is believed to be living in Europe.

Sinduhije has been suspected by Burundi of being behind the country’s RED-Tabara rebel group based in the Democratic Republic of Congo, a claim he denies.

The latest grenade attacks against civilians in Burundi by unidentified assailants on Sunday and Monday left at least five dead and several others injured.

Late Saturday, a mortar attack near the international airport in Bujumbura was claimed by RED-Tabara.

The attack caused no damage.

Nyandwi alleges that the latest blasts were “linked” to earlier attacks that Sinduhije is accused of orchestrating.

The government accuses the rebel group of being responsible for several deadly attacks and ambushes since 2015.

UK man linked to virus spread thanks doctors for recovery