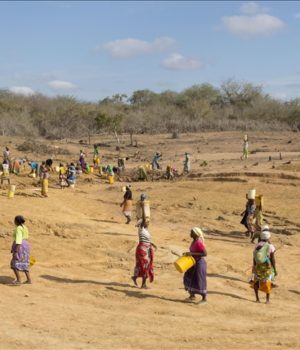 Kenyan President Uhuru Kenyatta declared a national disaster on Wednesday because of a drought that has ravaged 10 of 47 counties that make up the East African nation.

“The President has instructed The National Treasury and the Ministry of Interior and Coordination of National Government to spearhead Government efforts to assist affected households including water and relief food distribution as well as livestock uptake,” according to a statement from the State House.

The decision was made after Kenyatta met with 85 leaders from Kenya’s Arid and Semi-Arid Lands (ASAL), led by Treasury Secretary Ukur Yatani.

The presidency noted that more details of the comprehensive drought mitigation measures will be unveiled in due course.

According to Kenya’s National Drought Management Authority records, at least 2 million Kenyans have been hit hard by the current drought with predictions that the dry spell will worsen in the coming months.

No decisions at ‘frank and open’ migration talks