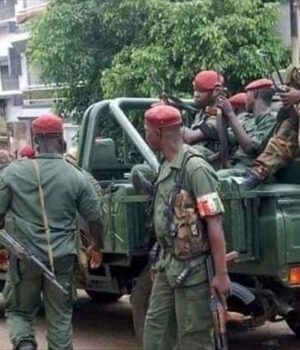 Guinea’s president was detained last Sunday by soldiers led by army colonel Mamadi Doumbouya, who on state television announced the takeover and dissolution of the National Assembly and constitution. The former president remains detained.

ECOWAS had earlier condemned the military’s takeover of power and threatened sanctions.

Barry said the regional organization also reiterated its demand for the immediate release of Conde.

The meeting also resolved to send a high-ranking delegation to Guinea’s capital Conakry on Thursday to meet with the coup leaders.

While opening the summit earlier, ECOWAS chairman and Ghanaian leader Nana Akufo-Addo stressed that the military had “clearly violated” the ECOWAS charter of good governance, describing the coup as “an unfortunate and regrettable incident.”

The coup leaders on Tuesday installed army officers at the top of the country’s eight regions and various administrative districts and have pledged to establish a “government of national unity.”

The junta has also released a group of political prisoners who were detained during Conde’s regime.

Conde, 83, was re-elected for a third term in October 2020 in polls marred by violence.

He first came to power in 2010 in a vote seen as the first democratic election since the former French colony gained independence.