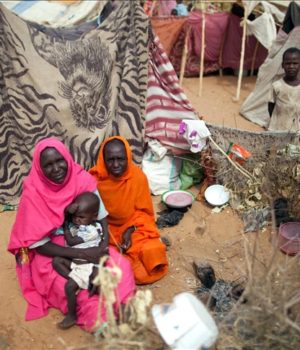 More than 2 million people have been displaced in northeast Nigeria, according to a EU official in the country.

“Hundreds of thousands are living in overcrowded displacement sites, without proper access to sanitation and clean water,” said the head of the EU delegation in Abuja, Samuela Isopi. “More than 3 million people have food insecurity and an equally high number of children are suffering from acute malnutrition. The number of out of school children has also increased exponentially.”

Isopi remarks were made during the premiere of HOPE, a documentary film sponsored by the EU.

It showcases the ravaging effects of insurgency on displaced populations in northern Nigeria.

Isopi said she was happy and proud of the premiere since it was her first official public event, after presenting Letters of Credence to President Muhammadu Buhari.

“The film HOPE tells us about the challenges that the residents of the northeast faced in their daily lives of which their sources of income were destroyed by the insurgency,” she said.

She said the EU, as Nigeria’s partners in development, has committed about €130 million ($151 million) in the past four years to assist the government in rebuilding, rehabilitation and peace efforts.

“This support has contributed to the restoration of basic services, such as health and nutrition, agriculture, sanitation, social protection education, conflict management, among others.

“Thanks to this support we are happy to see people are gradually returning to their communities with hope for a better future,” she said.

White House, FBI differ in accounts of investigation of aide