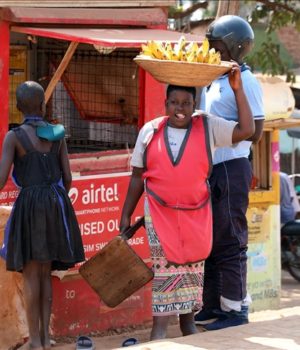 Despite possessing meager resources, the landlocked East African country of Uganda has been hosting 1.5 million refugees from South Sudan, Burundi, Somalia, Rwanda, Eritrea, Sudan, and many other African countries.

The government policy making it mandatory for the aid agencies to spend 30% of funds in the areas adjacent to refugee camps has helped to keep the xenophobic tendencies in check, claim the Ugandan officials.

Speaking to Anadolu Agency, an elderly person Zachary Baguma living near a refugee camp in Kyegegwa town said that local communities have accrued benefits due to the presence of refugees.

“We have benefited from infrastructures that have been put in place because of the refugee camp in our area. We have good roads, schools, and hospitals now,” he said.

Located about 200 kilometers (124 miles) from the capital Kampala, Kyegegwa town hosts refugees from the Democratic Republic of Congo, Rwanda, and Burundi.

Dennis Mwinsa, 29, a Congolese refugee who now sells watches, necklaces, and women’s bags said the Kyegegwa has become a home for him.

“I live a more comfortable life here than I used to live in the jungles of Congo where rebels and militiamen attack villages at will. In the camp, we get all the basic needs. We have hospitals, schools, and a police station. They also give us money to buy food,” he told Anadolu Agency.

He said in the past UN High Commissioner for Refugees (UNHCR) was providing them food, but now they get cash. He said it is after saving the money they give them monthly to buy food that he started his business.

Fidele Kabene, director of Young African Refugees for Integral Development (YARID), said every refugee is getting 70,000 Ugandan shillings ($20) every month from the UN agency to buy food.

‘’I use that money to buy food and some basic requirements for my family of five. We get 350,000 Ugandan shillings ($98) and we budget carefully so that the money takes us through the month, ‘’ said William Wimana, a Burundian refugee.

Ivan Lokwang, 30, a South Sudanese refugee said the Ugandan government has been allowing them to do business if they generate resources.

Ambrose Akaga, an elected member of western Kikuube District Council, said the money paid to refugees to buy food ultimately circulates locally and ends up in the hands of local people, who sell food and other basic items.

The UN agencies spent $160.17 million on refugees in Uganda, according to the figures available with the UNHCR. There is also money donated by countries to help homeless people. Japan donated $9.8 million in April 2021, Sweden gave $1.2 million in July 2021, while Germany contributed $4.4 million.

David Musenze, an economist in Kampala said though these funds are meant for refugees, they do circulate to keep the local economy afloat.

“Many people who live near the refugee camps do get benefited as the refugees buy most of what they need from them,” he said.

The security and political stability in Uganda have come in handy for many people in neighboring countries to send their children to the country to pursue education, said Ben Anyama, chairperson of Adjuman district.

Ugandan President Yoweri Museveni recently said that he has himself lived as a refugee in the past, therefore his country welcomes those who have been forced to leave their homes.

The country recently also hosted dozens of refugees from Afghanistan after the Taliban took over the country on Aug. 15.

Museveni recently said that Uganda’s gates will always remain open to refugees. He said that having lived as a refugee himself he knows how painful it is to be a refugee. It is probably for such reasons that even recently Uganda hosted dozens of Afghanistan refugees.

By hosting 3.7 million refugees Turkey tops the list, followed by Colombia with 1.7 million and Uganda ranking third with 1.5 million.

Bach says 2020 events should be held in disaster zone