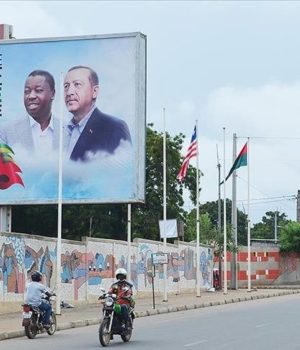 Posters of Erdogan and his Togolese counterpart Faure Gnassingbe with the words “Together a Fairer World is Possible” can be seen in various parts of the capital.

Before the first official visit from Turkey at the presidential level to Togo, Anadolu Agency spoke with Togolese people.

Cherafdine Tchadjobo, 27, who works as an assistant director, said he was aware of the visit thanks to the posters.

“I knew that Turkey opened an embassy in Lome. I am sure that the Turkish president’s official visit will improve relations a lot. I believe that the two countries will be close friends with each other,” he added.

Monique Adade, 24, an industrial engineer, said she had been hearing about Turkey very often in recent years.

Noting that she was aware that ties between the two countries have improved, Adade said a partner like Turkey would benefit Togo.

“When I saw the posters, I became aware of the visit of the Turkish president. I am sure that this visit will create important opportunities for the two countries,” she said.

Togo is President Erdogan’s second stop on his four-day African tour. He arrived in Angola, the first destination, on Sunday and will travel to Togo and then Nigeria.

Turkey opened its Lome embassy on April 1 this year.