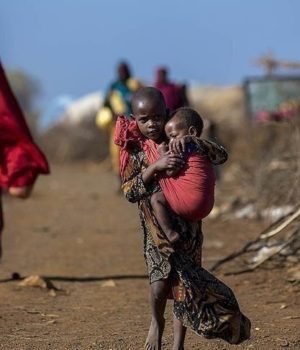 A year ago, Mulaleli Sibanda, living in Zimbabwe’s Beitbridge area, battered his three-year-old stepdaughter to death. He later told police that the toddler was crying and disturbing his sleep.

In another heart-rending incident, angry at his 13-year-old son for misbehaving at a family party, Solomon Musavengana, 48, beat him to death, according to police records.

The Zimbabwe National Statistics Agency (ZimStat) has reported murders of 22 children from 2019-2020 at the hands of their parents and guardians, sending alarm bells in the society.

Edious Gava, 12, a homeless child in Beitbridge said, he had to run away from his home as his father had attempted to kill him early this year.

“My father always came home drunk and used to blame me for all the wrong things. The day I fled; he had almost killed me. He kicked me with his gumboots. He was angry that I had not watered the garden at home,” Gava told Anadolu Agency.

Unable to face abuses, in some cases, children have resorted to suicide.

Gava said that his 11-year-old friend took his own life after consuming poison when he faced abuse at home.

“Children are flogged and killed every day in homes and they have nowhere to go. There is the government’s social welfare department. But it does not take care of the abused children because it has no resources,” said Bhebhe.

Taking note of such abuses, Zimbabwe’s High Court in 2017 had banned corporal punishment both in schools and homes. The ruling had come after some parents complained that their children as young as six years old were beaten by teachers.

According to psychiatrist Anesu Chinoperekwei, abuses are often taking a toll on children’s psychological wellbeing.

“Coping mechanisms are acquired through life experiences and most children are still learning ways to cope with difficulties. As such, when presented with abuse and brutalization, some children may run away from home while some may develop depression and resort to suicides,” said Chinoperekwei.

She said parents need training and guidance to deal with children to avoid incidences of abuse.

According to Getrude Dadirai Gwenzi, a research associate at the University of Johannesburg in South Africa, the ability of Zimbabwean families to take care of children has been compromised by a collapsing economy, compounded by COVID-19.

She said that about 4.3 million people in rural communities, including children, were facing a food shortage in 2020. The World Food Programme has also indicated that at least 60% of the population of Zimbabwe needs food aid.

Taylor Nyanhete, director of the Zimbabwe National Council for The Welfare of Children (ZNCWC), agreed that COVID-19 has further worsened the situation for children.

“During the peak of COVID-19, physical and emotional abuse took place and some children could not stand that. They either ran away from their homes or resorted to taking their own lives,” he said.

Claris Madhuku, director of the Platform for Youth Development, a civil society organization in Zimbabwe, said the generation gap was also contributing to abuses and aggravating the situation.

He added that those who run away from homes are emotionally weak and soon get introduced to drug abuse, thus devastating their lives forever. This makes them mentally deranged and develops a tendency to resort to suicide.

According to Childline Zimbabwe, they had received 25,000 cases of abuse of children in 2018. The sexual abuses accounted for 26%, physical abuses 20%, neglect 17%, emotional abuses 17%, and the rest 20% other forms of abuses. The Childline is a telephone hotline to address issues of child abuse, working with the Zimbabwean government to combat all forms of child abuse.

Gunmen fire on U.N. base in Central African Republic

Publisher of Franzen, Eugenides is stepping back