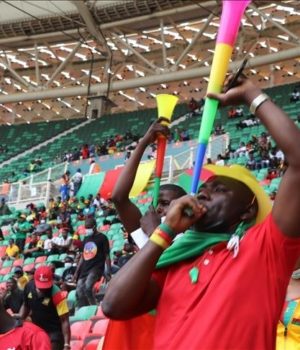 An infamous plastic horn, vuvuzela, was banned in previous years for its annoying sound has returned to the football stadiums during the ongoing 2021 Africa Cup of Nations in Cameroon.

The vuvuzela, 61 centimeters in height and 100 grams in weight, has no keys or toning holes whatsoever.

When played en masse, the vuvuzela – sounds like an elephant or bee – makes a deafening noise reaching 135 decibels.

The instrument, which caught the attention of the global community first in the 2009 FIFA Confederations Cup and then in the 2010 World Cup matches held in South Africa, disturbs some football fans and players.

Vuvuzela was not banned in the 2010 World Cup, but after the backlash from the global community, FIFA banned it in the upcoming World Cup tournaments in 2014, 2018 and 2022.

UEFA also banned the instrument from their organizations, including the Champions League, European Championship and Europa League.
Some local governments ban the sale of the vuvuzela, citing that it is harmful to human health.

However, some fans love the vuvuzela and consider it a versatile instrument.

“With the vuvuzela, we encourage our own teams while intimidating our opponents,” says Cameroonian football fan Mussa Bouba.

Another Cameroonian football fan, Adamou Ngo, says: “We are rallying our team with the vuvuzela.”

Turkish Cup Round of 16 ends

Biden underscores need to maintain Northern Ireland peace, will not weigh in on UK-EU...