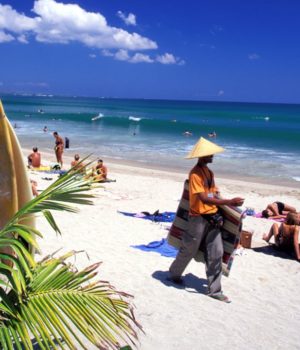 Indonesia’s holiday island of Bali will start welcoming back travellers from all countries from later this week, officials said on Monday, more than three months after announcing it was open to selected nationalities.

Though Bali officially opened to visitors from China, New Zealand, and Japan among other countries in mid October, there has since been no direct flights, Tourism minister Sandiaga Uno told a briefing.

The reopening follows similar announcements by Thailand and the Philippines, which put quarantine waivers on hold in December over initial uncertainty about vaccine efficacy against the Omicron variant of COVID-19.

The decision comes despite a steady rise in Indonesia’s COVID-19 cases this month, despite having brought outbreaks under control in the second half of last year. Health authorities have attributed the increase to Omicron.

Known for its surfing, temples, waterfalls and nightlife, Bali drew 6.2 million foreign visitors in 2019, the year before COVID-19 struck, but tight pandemic border restrictions devastated tourism, which is usually worth 54% of its economy.

Singapore Airlines (SIAL.SI) said on Friday it would resume flights to Bali from Singapore starting on Feb. 16.

Senior minister, Luhut Pandjaitan, said from Feb. 4 international visitors who were vaccinated against COVID-19 would still be required to do between five and seven days of quarantine.

According to Ida Ayu Indah Yustikarini, an official at the Bali Government Tourism Office, the island has been receiving foreign visitors in the past few months via the capital Jakarta, but there were no official numbers available.

China says U.S. trying to bully it into submission as fresh tariffs kick in

Seoul police up security after rally at US envoy residence