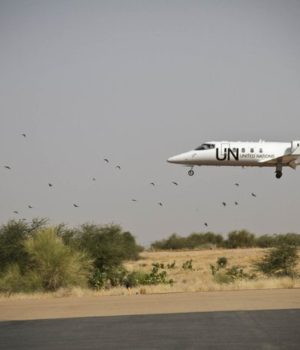 Mali has reopened its airspace, which it had kept closed for some time, for flights of the United Nations Multidimensional Integrated Stabilization Mission in Mali (MINUSMA), the mission said Thursday.

The move was due to ongoing fruitful negotiations with Bamako, MINUSMA said in a statement.

MINUSMA will continue to support Mali in the fight against terrorism, it said.

The junta administration, which came to power in Mali by a coup d’état on May 24, 2021, announced on Jan. 2 this year that it had decided to postpone democratic elections for five years.

Following this, member countries of the Economic Community of West African States (ECOWAS) decided to recall their ambassadors to Mali, freeze Mali’s assets at the Central Bank of West African States (BCEAO), cease economic assistance, suspend all types of commercial relations with Mali except for basic necessities and medical supplies, and close the borders of ECOWAS countries to Mali.

After 13 countries, including its neighbors, closed their borders to Mali, the administration in Bamako announced that it would make new flight arrangements.

MINUSMA has also suspended flights through Mali’s airspace except for medical needs until the new regulation is clarified.

Mali recently refused to allow a German military transport plane to fly over its territory on its way to Niger, the German air force said Thursday on Twitter.

MINUSMA has more than 15,000 soldiers and police officers from 61 countries stationed in northern and inner parts of Mali.

It was established by a UN Security Council resolution on April 25, 2013, following a security crisis that erupted in Mali.

Mali has been in political and security turmoil since 2012.

Pakistan PM warns against war in region amid Iran tensions with U.S., Saudi