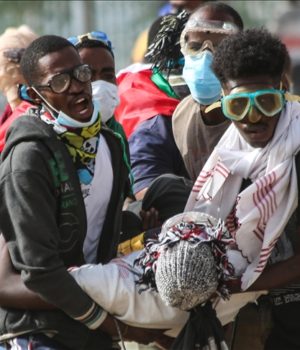 Three associations representing Sudanese doctors on Tuesday suspended working at hospitals run by the military as part of pressure for full civilian rule.

“Continuing work by doctors and medical staff at hospitals run by the military and police is a recognition of the practices of these putschist forces,” the three groups said in a joint statement.

The statement was signed by the Central Committee of Sudanese Doctors, Sudan Doctors Union and the Sudanese Committee of Consultants and Specialists.

The three associations also said doctors will stage a three-day strike as of Tuesday.

There was no comment from the Sudanese authorities on the statement.

The escalation comes one day after seven demonstrators were killed by army fire during protests in the capital Khartoum.

Sudan has been in turmoil since Oct. 25, 2021 when the military dismissed Prime Minister Abdalla Hamdok’s transitional government and declared a state of emergency.

Prior to the military takeover, Sudan was governed by a sovereign council of military and civilian officials tasked with overseeing the transition period until elections in 2023.

Hamdok was reinstated on Nov. 21 following an agreement, but protesters denounced the deal, insisting on the removal of any military influence over the transitional governing coalition. He resigned on Jan. 2, citing a political deadlock.

As doors close in the US, China’s Huawei shifts to Europe