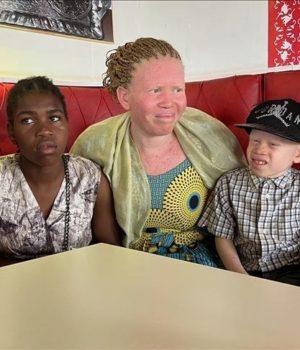 Activists in the landlocked East African country of Uganda have alleged that people with albinism — an inherited condition that leads to someone having very light skin, hair, and eyes – face discrimination in the country.

Speaking to Anadolu agency Director of Albinism Umbrella in Uganda, Olive Namutebi said that people with albinism are denied jobs in the country, even if they have adequate qualifications.

“Our children are denied vacancies in some schools. Some parents abandon children with albinism,” he said.

Such is the abhorrence for albinism that at many places husbands have abandoned their wives after they gave birth to children with albinism.

Activists say, there are hundreds of single mothers with albino children because their husbands ran away from their homes due to fear of being associated with the albinos.

Peter Ogik, another activist who is himself suffering from albinism said although the government has been trying to fight against discrimination, it is not easy to change peoples’ minds.

According to the records available with the Albinism Umbrella, 5,000 people are living with albinism in the country.

Ogik mentioned a recent incident where a baby was born with albinism and the family elders chased his parents, who had to take refugee far away from their village.

He said that in some homes children with albinism are kept in cages away from the eyes of people.

“The level of discrimination is much higher in rural places than in urban areas. Women with albinism also face the threat of rape due to a belief that sex with them can cure HIV/AIDS,” he added.

Jacinta Namukose, 39, a resident of Namwiwa village in the eastern Uganda district of Kamuli who gave birth to the baby with albinism said the midwife who was assisting in the delivery of the baby ran away from operation theatre as if she had seen a snake.

In a similar incident, Annet Nanozi, 30, recently gave birth to twins with albinism in the eastern Uganda referral hospital of Iganga district. Her husband abandoned her and has not returned to her yet.

“We lived normally until when I gave birth to these children. When he came to see me after giving birth, he got shocked when he realized that the babies were albinos. He told me boldly that in his family they do not give birth to albinos,” she said.

The spokesman of the Gender and Labor Ministry, Frank Mugabi said the government has come up with policies against such discrimination.

“We have a policy on the inclusiveness of all persons with disabilities where people with albinism also fall,” he added.

He said the government also has a special program called economic fund for people living with albinism.

Gender and Labor Minister Betty Amongi said recently that the Ugandan government does not tolerate any kind of discrimination against people living with disabilities.

At least 5 killed as anti-U.N. protests flare in east Congo

Russia to bar U.S. diplomats from monitoring its elections – RIA