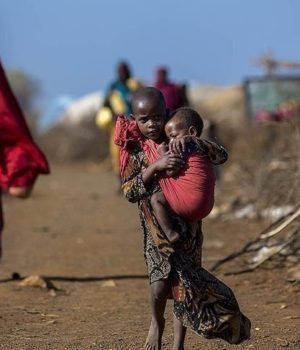 Even as the Southern African country of Zimbabwe continues in the throes of a severe economic crisis, the regions bordering South Africa, Botswana, Mozambique, and Namibia are witnessing prosperity and affluence.

While walking on the streets of Beitbridge town, bordering South Africa and 500 kilometers (311 miles) from the capital Harare, one can notice modern homes replacing the old thatched huts fast and people breaking free from poverty.

Locals said the prosperity in the town was because most of the residents have been crossing over to South Africa for work and their remuneration is changing the lot of the town.

Speaking to Anadolu Agency, Retina Vurotho, 57, pointing to her new house with roof tiles and other modern amenities, said just five years ago, her family was living in a thatched hut. Her two sons are working in South Africa, and are sending remuneration from across the border.

“If my sons had not left for South Africa, I would have been still living in my poor thatched hut. They have managed to earn a better living there and have built a good house for me which I never dreamt,” she said.

Many villagers here like Vurotho also boast of having running water and solar electricity in their modern village homes.

The people are beating the rough edges of poverty in other border areas as well. The economy is booming in Hingwe and Huwana villages in Plumtree district bordering Botswana as well.

Lindiwe Vumani, 33, resident of Hingwe, has constructed a mansion of eight rooms with solar panels fitted on the roof to provide round-the-clock electricity and piped water supply.

Her 41-year-old husband, Themba Sibanda, is working as a builder in neighboring Botswana.

“My husband sends money every week, about 2,500 pula ($218) and over the past four years, we have used most of his earnings to modernize our rural home. Yes, we used to live in poor thatched huts, but that is no more now,” said Vumani.

In Chipinge district bordering Mozambique, villages like Chisumbanje and Checheche are also fast turning into little towns as villagers are striking fortunes in the neighboring country.

Happias Harambe, a developmental expert based in the capital Harare, said in contrast to mainland Zimbabwe, people in the border areas have proven good entrepreneurs, who work across the borders.

“Villagers in border areas are becoming more successful, developing their dwellings which they have modernized, sprucing up local village townships, and even powering such rural shopping centers with solar energy. Their proximity to thriving economies in neighboring countries has helped them,” Harambe told Anadolu Agency.

According to Finance Minister Mthuli Ncube, the country’s remittances from the diaspora have reached $1billion from $636 million in 2019.

Since COVID-19 impost travel restrictions, villagers have resorted to modern banking means to transfer remittances to their families from across the borders.